The soldiers, stationed at Za’tara military roadblock, north of Nablus, shot the young man with several rounds of live ammunition, reportedly after he attempted to stab them, and prevented Palestinian medics from approaching him.

No soldiers were injured in the reported incident.

After Omar was shot and seriously wounded, the Palestinian Detainees’ Committee reported that the Israeli Salem military court issued an order, remanding him for seven more days, awaiting interrogation, despite his serious injuries.

It added that Younis was transferred to Beilinson Israeli medical center, where he remained in a very serious condition, hooked to a respiratory machine, until his death several days later.

Omar was from Sanniriya town, south of Qalqilia, in the northern part of the occupied West Bank. Source: IMEMC

April 23, 2019: Mohammad Majd Kamil, 22, was killed when Israeli police chased him, in the Arab town of Arrabat al-Bottuf, in northern Israel,Palestinian sources have reported.

Mohammad Majd Kamil, 22, from the town of Qabatia, south of the northern West Bank city of Jenin, was pronounced dead after falling from a considerable height while Israeli police officers were chasing him.

The young man worked in Israel, as a laborer, and apparently did not carry a work or entry permit.

According to WAFA News, hundreds of Palestinians work illegally in Israel, until Israeli police chase, detain and deport them back to the occupied West Bank.

Palestinians in the occupied West Bank face an unemployment rate of 18-19% according to the World Bank, while in Israel, more jobs are available, with better wages.

Mohammad was from the town of Qabatia, south of the northern West Bank city of Jenin. Source: IMEMC

April 23, 2019: Mohannad Amin al-Baz, 13, was killed in an “accidental explosion” in central Gaza Strip, according to the Palestinian Health Ministry in the besieged Gaza Strip.

The Health Ministry identified the child as Mohannad Amin al-Baz, 13 years of age.

There has been no detailed information regarding the child’s death, but the short statement by the just said he was accidentally killed in his home in Deir al-Balah in central Gaza Strip.

However, the Quds News Network, the child was accidentally killed when an explosive charge detonated while he was apparently playing with it.

April 18, 2019: Fatima Suleiman, 42, was killed near her home in Teqoua’ town, southeast of Bethlehem in the occupied West Bank, after being rammed by the car of an illegal colonialist Israeli settler.

According to eyewitnesses, the Israeli attacker was driving a large truck when he struck the woman’s car, throwing her out of the vehicle. The attacker then ran her over and killed her, before fleeing the scene.

The slain Palestinian woman was a teacher at the Rashayda School.

The Israeli Police did come to the scene, but only to remove all security camera footage from a house overlooking the area where the incident took place.

The incident led to protests, as dozens of residents, mainly youngsters, took to the streets, and hurled stones at the Israeli army jeeps, while the soldiers attacked them with live fire, rubber-coated steel bullets and gas bombs.

The soldiers then detained a Palestinian teen, before handcuffing and blindfolding him, and later shot him from a very close range, after he attempted to escape while he was still cuffed and blindfolded.

The shooting took place following the funeral procession of the Palestinian woman.

A picture was posted on social media showing the young man, who was cuffed and blindfolded trying to run away, before the soldiers shot him.

A video posted on social media (below) shows the teen on the ground when witnesses lifted the teen’s limp body, bleeding heavily, carrying him from the scene, as the Israeli soldier stood pointing the same pistol at another young Palestinian man.

Fatima was from Teqoua’ town, southeast of Bethlehem in the occupied West Bank. Source: IMEMC

April 15, 2019: Ishaq Abdul-Mo’ti Eshteiwi, 16, died of injuries sustained when he was shot by Israeli forces east of Rafah near the border fence on April 3rd.

After he was shot, the injured boy was grabbed by Israeli soldiers who thrust him into a military vehicle and took him to a military base in Israel. The Israeli military claimed that Ishaq and two other children were attempting to escape over the border fence when they were shot.

When the incident occurred, one of the teens suffered fatal injuries when he was shot. The Israeli military reported that Ishaq suffered “mild injuries” after he was shot at close range by their sharpshooters, and the third boy was taken onto custody without reported injury.

But he has remained in Israeli custody since being shot, and his family has not been allowed to see him, according to local sources.

His parents were informed on Sunday that Ishaq had succumbed to his injuries. It is unknown whether further injuries had been inflicted upon him while in Israeli military custody due to “harsh interrogation”/torture. Injured Palestinians detained by Israeli forces have frequently reported that Israeli forces torture them while in custody.

On the same day that Ishaq was killed, a 14-year old Palestinian boy was found, after his family had reported him missing for three days, in an Israeli prison. Ramez Tamimi, 14, was kidnapped by Israeli soldiers from his village, Dir Nitham, north of the central West Bank city of Ramallah, and was eventually found in ‘Ofer’ prison, and his family was never informed.

Ishaq was from Rafah, in the south of the Gaza Strip. Source: IMEMC

April 12, 2019: Maisara Mousa Ali Abu Shallouf, 15, was shot and killed by Israeli soldiers at the weekly Great March Processions in the besieged Gaza Strip. The soldiers also injured 55 other protesters, including two medics.

The Palestinian Health Ministry reported that the soldiers killed Maisara by shooting him with live fire in the abdomen, east of Jabalia, in the northern part of the Gaza Strip.

The soldiers also fired live rounds and gas bombs at medics trying to reach the child to provide him with urgently needed medical help.

Dr. Ashraf al-Qedra, the spokesperson of the Health Ministry In Gaza, said the soldiers shot 66 Palestinians, including 15 children and six women, in addition to two medics.

It added that one of the wounded Palestinians suffered life-threatening wounds.

The Health Ministry also stated that the soldiers shot two medics and caused others to suffer the effects of teargas inhalation.

The protests took place in five areas in the eastern parts of the Gaza Strip, from Beit Lahia, Beit Hanoun and Jabalia, in the northern part, to Gaza city and central Gaza, in addition to Khan Younis and Rafah, in the southern part of the coastal region.

Media sources in Gaza said the army used high-velocity gas bombs, and live fire, targeting many areas far away from the perimeter fence.

They added that the soldiers also targeted several ambulances, medics and journalists, with sniper fire, in addition to the high-velocity gas bombs.

The protests this week were also in support and solidarity with the hunger striking detainees in Israeli prisons, facing constant violations and denied basic rights.

Maisara was from Jabalia, in the northern part of the Gaza Strip. Source: IMEMC

April 2, 2019: Mohammad Abdul-Mon’em Abdel-Fattah, 23, was killed when an Israeli settler opened fire on him near Beita town, south of Nablus.

In addition to Mohammad, another Palestinian was shot and injured, identified as Khaled Salah Rawajba, a 26-year-old resident of the village of Rojeeb, east of Nablus. He was shot in the abdomen and taken to Rafidia hospital in Nablus.

The Israeli settler who shot and killed the young man tried to claim that “he had a knife” – but video footage taken by another Israeli settler on the scene, showing the brutal and callous treatment of Adel-Fattah’s body after he was killed, shows that there was no weapon.

In the video, a soldier and a settler are seen kicking the young man’s corpse, flipping him over and going through his pockets, finding nothing.

According to eyewitnesses, the claim of an attempted stabbing were completely false. They said that Mohammad was a truck driver who was waiting at the checkpoint when the Israeli settler closed the road with his car. Khaled then got out of his car and tried to tell the settler to move. But the Israeli settler began shooting.

Khaled Rawajba, an employee at an auto repair shop on the side of the road, heard the altercation and stepped out of his workplace to see what was happening. He was then shot as well, and seriously wounded. 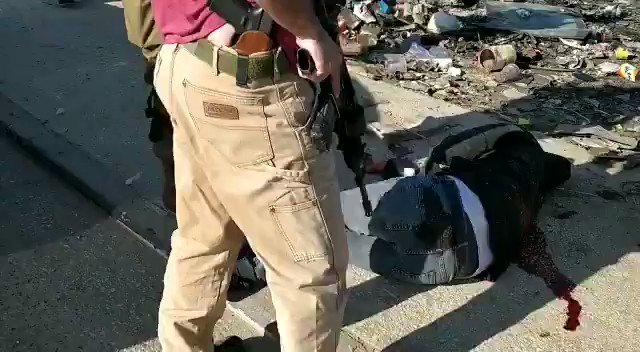 April 1, 2019: Fares Abu Hajras, 26, died from serious wounds he suffered the previous Saturday when Israeli soldiers shot him east of Khan Younis, in the southern part of the Gaza Strip, during the Land Day protest.

The Palestinian Health Ministry said that Fares was shot with a live round in the abdomen, and remained in critical condition until he succumbed to his wounds.

On the day of his injury, the soldiers killed four Palestinians, and injured 316 others, including 14 who suffered life-threatening wounds, during protests across the perimeter fence, in the eastern parts of the Gaza Strip.

The Maan News Agency has reported that Israeli soldiers have killed 271 Palestinians since March 30th, 2018 in the Gaza Strip, and injured more than 30398 others, including 16027 who were moved to various hospitals and medical centers.

The Health Ministry said that among the wounded are 3175 children and 1008 women and added that 136 Palestinians suffered amputations; 122 in the lower limbs, and 14 in the upper limbs.

Also among the slain Palestinians are two journalists, identified as Yasser Mortaja, and journalist Ahmad Abu Hussein, in the Gaza Strip, while the soldiers injured dozens of journalists.

The information does not include dozens of Palestinians who were killed or injured by the Israeli army after crossing the perimeter fence and were never returned to the Gaza Strip.

Fares was from Khan Younis, in the southern part of the Gaza Strip. Source: IMEMC

The Palestinians gathered in the streets and alleys of the refugee camp, and protested the invasion, while several protesters hurled stones at the armored military jeeps.

Adwan was near his home when he was shot and killed – it was unclear if he was participating in the protest or not.

The WAFA Palestinian News Agency said Mohammad ran towards his home due to the intensity of the live rounds fired by the soldiers, but once he approached his home several soldiers were standing right in front of it, and opened fire at him.

WAFA added that the soldiers shot the young man with more than 10 bullets, before dragging his body into their jeep, and prevented medics from reaching him to provide aid, until he had passed away from blood loss.

The Israeli forces then handed Adwan’s corpse to medics with the Palestinian Red Crescent Society, who transferred his body to the Ramallah governmental hospital.

His funeral ceremony was held at noon after his body was transferred via ambulance to his home, where thousands of Palestinians gathered and participated in his funeral procession and ceremony.

During the invasion of the camp, Israeli forces stormed the home of the Rajab family, and abducted three brothers: Ibrahim Rajab, Yousef Rajab, and No’man Rajab.

The killing of Adwan comes after a brutal crackdown on the Palestinian Land Day protest on Saturday in Gaza, in which three Palestinians were killed by Israeli forces. Two of those killed were 17 years old.

It is worth mentioning that the soldiers also invaded the nearby city of Betunia, in addition to the villages of Qarawat Bani Zeid and Kafr Ein.

The soldiers searched many homes, and summoned for interrogation a former political prisoner, identified as Mahran Raja Saif, after invading his home in Qarawat Bani Zeid village.